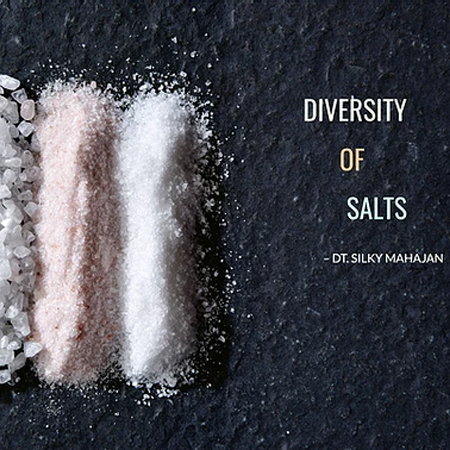 Indian food is all about savoury let it be paratha-chutney, idli sambhar or poha and the main ingredient is salt. Our taste buds are not used to food without salt or with too little salt.

Even though the word ‘Salt’ brings us an image of a white powder used commonly in almost every kitchen, house or restaurant, there are many different varieties of salt available in the market.

Let's take a look at the different types of salt and what they’re best for:

The most common of all used in every kitchen from house to restaurants is harvested from salt deposits found underground. In other words, it is the highly refined and finely grounded version of rock salt. The impurities and trace minerals are removed during processing. Most of the table salts available in market are iodized, as in iodine has been added.

Why iodine is added?

Originally, iodization was adopted to reduce the incidence of goitre, an enlargement of the thyroid gland. Iodine being a trace element found in seafood, dairy products, grains and eggs is used by

thyroid gland to produce thyroid hormone, which helps in tissue repair, promote growth and regulate metabolism. Vegetarians, vegans and pregnant women have high risk of being iodine deficient leading to hypothyroidism and other maladies, thereby iodine is added to the salt. Iodine also plays a crucial role in brain development, especially during gestation.

Rock salt is sourced from the underground rocks from under the earth surface, which is mined and refined for consumption. It is characterized by large and chunky crystals and can be colourless, white, light blue, dark blue, purple or pink in colour according to the impurities and minerals present in it. Rock salt is used mostly in large scale production industries such as ice cream factories.

Sea salt is produced by the evaporation of ocean water or from saltwater lakes. It is less processed and hence contains trace amount of minerals such as – zinc, potassium and iron, giving it a much more complex and strong flavour. From nutrition perspective there is no much difference between table salt and sea salt. But sea salt has less sodium as compared to table salt when measured in teaspoon due to its crystal form. It is widely used as a seasoning salt, in cosmetics and in the preservation of food.

Himalayan pink salt has been crowned as the healthiest salt in the market, reason being it is the purest form of salt harvested from the Himalayan mountains. It has 84 natural minerals and elements that are found in human body. It appears pink in colour due to the presence of Iron oxide. In terms of Iodine, Himalayan pink salt contains less Iodine as compared to Iodized salt.

Himalayan pink salt is believed to contain less amount of sodium compared to table salt which makes it an ideal option for hypertension patients. Also, Himalayan pink salt has been claimed to help with balancing the body pH, improve sleep, regulate blood sugar and help in regulating blood pressure. Apart from being used as a seasoning salt it is also used in some bath salts for its detoxifying properties.

Black salt or Kala namak is a type of pungent smelling rock salt. Basically, it is processed form of Himalayan pink salt which is heated to an extremely high temperature with addition of natural herbs such as harad seeds, amla, babul bark etc. It is used in Ayurveda as a laxative and digestive aid due to the presences of potassium, calcium, iron and sulphur. It tends to have less sodium when compared to table salt. Also, it controls diabetes as it helps in maintaining blood sugar levels. Also, good for Cholesterol. But moderation is the key.

TATA salt is available in every corner of India. So, it’s best to know the types, so as to choose easily.

Note: RDA recommendation of 1500mg/day for adult includes the sodium consumed in the entire day e.g. home made food, Outside food, Snacks etc

No salt has yet been proven to be healthy, all salt consists of sodium and chloride with trace amount of minerals. The healthiest choice would be to choose a salt which is less processed, because no matter which salt you choose, moderation is the key to healthy life. Just remember to control your salt carving and reduce the amount of salt consumption. Avoid processed foods, go for low-sodium products, avoid sprinkling the salt over your salads, opt for food items with less salt when dining out, always read the labels while buying any food products and buy salt-free snacks as much as possible.

In case of any related query or to book an appointment with Dt. Silky Mahajan please send us a mail at info@foodsandnutrition.in or call on 7829999400.

Disclaimer: Results vary based on multiple factors such as gender, age, genetics, activity factor & compliance on Diet & other instructions.
FAQ Career Contact Us Privacy Policy Terms & Conditions
© Copyright 2021. All Rights Reserved
Thank you for your enquiry. We will get in touch with you soon.